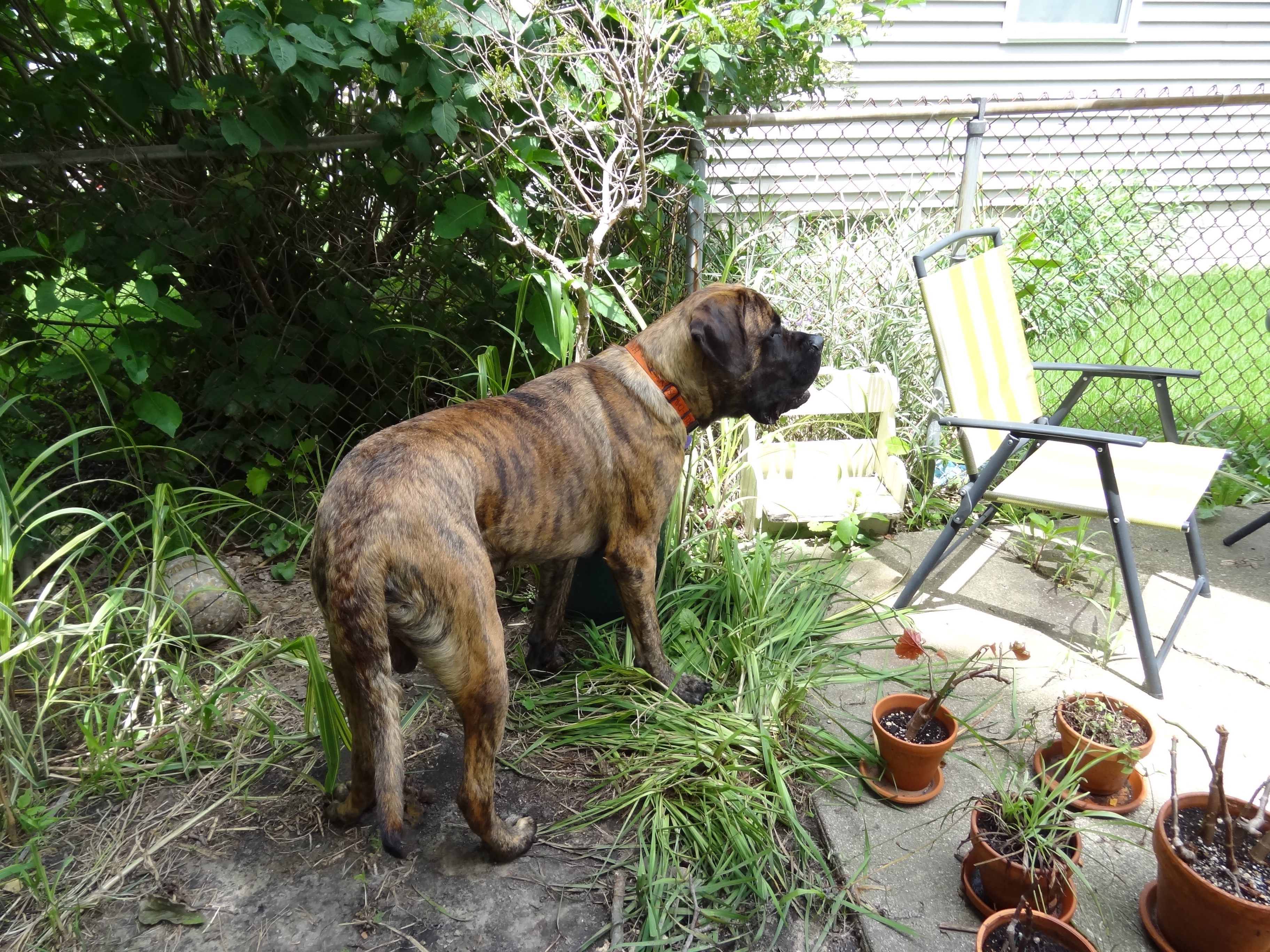 Yeah he is rather large, but actually he was the runt of the litter and we had to take him early becuz he was not being properly cared for. He only weighs in at 150, and his dad was 175 which still isn't average...lol But you know what, we're happy with him just the way he is and at times we're glad he doesn't weigh more....like when he's in the bed with us......lol

Astrid, he is a Mastiff, very gentle and the reason we got him is because they VERY laid back and need little exercise, as a matter of fact it is recommended that you don't exercise due to their size...males typically run fr 150-200...sometimes bigger...lol It's just too much strain on their heart. They are prima dona's....lol

OMG Terri that made me laugh...about the dog tearing up the van...I can just see that. You just have to use tricks to clip their claws...Mastiffs are VERY food oriented...they will do anything for a treat like a hot dog or a piece of chicken...mmmm Now, bathing them is a different story....LOL Zeke is not fond of his bath to say the least. I think the best bet is to take them into the grooming shop and bathe them yourself..other wise they charge you by the pound....ouch! We used to take her in and just let them bathe her, but she was much lighter...lol

Wow Terri...what a story...you should publish that one...LOL The only thing I didn't get was who hit who with the pipe.....lol We're going to work a little harder with Zeke on the bath issue....big baby that he is! Ya know my friend told me once, "Gail when pp tell me they are having behavior problems with their dogand I watch them interact, 9 out of 10 ties it will be the owners' fault. She said ppl just don't get it....you don't hit or punis, you reward when they DON'T do the behavior. Do you watch Victoria Stillwell? I like her....and before anyone asks, I hate Cesar Milano...bad teacher with his chhchhh and jabbing his fingers into the dogs neck...okay I won't get into that....if you like him I'm sorry....

Terri, don't get me wrong...when you have a dog that's stubborn or is hard to train, and they're big on top of that, you definitely have to let him know who's boss or you will not be able to enjoy your dog....and as you said to eaxh his own. The fact is that all dogs are different, even within the same breed sometimes. I watch the shows and read just gain knowledge and information in case I ever run into a situation that needs to be addressed. ;)