I know there have been lots of discussions about family and friends and their reactions to our diagnosis. I've told my story before about how I pretty much lost contact with everyone except my husband, daughter, and mom-in-law (my champions, my rocks). I rarely talk to my father, 84 years young, my mother, 82 years with dementia (she rarely knows who I am), and my sister who is 6 years older than me even though we live in the same area. I try to keep in touch, but it usually seems forced and uncomfortable. I thought I would share a text I received from my sister about my mother being in the hospital. Keep in mind, I live within walking distance of this hospital.

I cannot find the words to describe my anger and my hurt. My sister is the type that wants to be the golden child, so in some ways I'm not surprised.

So, for any other lupie friends that are going through similar issues with family and "friends", know you have my love and support and will be there for you. 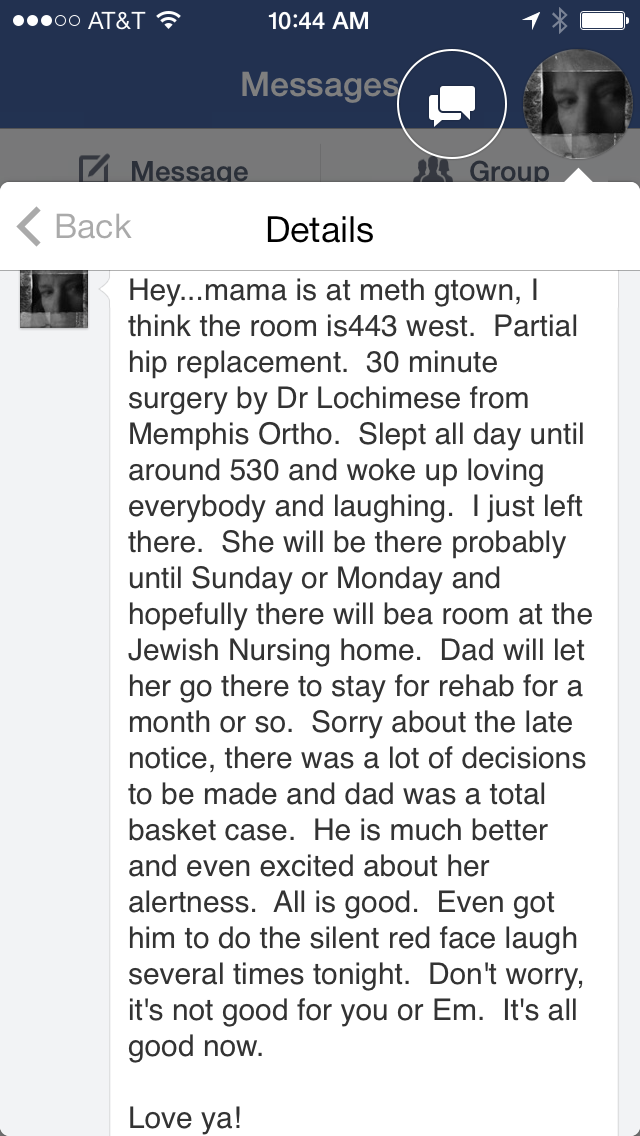 wasn't sure if the screenshot was showing up in my previous post.

wow I feel your anger, I would be pissed too.

I understand in my house with my husban, 30 year old daughter and her five kids, I don't get any recognition and when I am having a bad day it's so hard to get help. I feel for you and wish I didn't have to go through it either.

Artchick...How terrible to feel so isolated from the family and in such an in your face way...I don't know why anyone would purposely do this to another. I know with my brother's out of town, I tend to be the one in the "know" of what's going on with my folks...but anything as important as this I would have notified them ASAP. I always wished I had a sister and having one close by would have been so nice. I am sorry she doesn't realize what she has in you and how she hurt you by her actions. Hugs to you!!!

I understand your anger. Try to look at it from their perspective if you can. They most likely didn’t want to worry you and make you sick so they waited to tell you. Misguided I know but I doubt it was done with malice in their hearts. I’m usually the one everyone turns to when my parents need help which is stressful in a different way. My sister finally stepped in and took care of our mom when she came down with pneumonia since I was also fighting the same cold. I also have to reach out to my father if I want to see him. Something about men of a certain age. They won’t reach out. The funny thing is that I’m his favorite but he still doesn’t call. Just a quirk I guess. I had to have a sit down with my family a few years ago to tell them to not keep things from me. I’d much rather be informed and risk a flare than to be kept in the dark. Perhaps you should let your family know that as well? Just a thought. Gentle hugs

I have not heard from my daughter (who lives 10 miles away) since Christmas and have not heard from my son (in CA) except about money since Christmas. My mother passed away one and a half years ago and I was an only child. No relatives in this area. I am feeling so awful - so lonely and wondering what kind of a mother I've been to raise two kids like this. A new baby is on its way in CA at the end of April and no invitation to come out. I have not seen my grandson since skyping on Christmas day - his second birthday is in a week. No money to even send him a gift. I have lupus, a colostomy bag, hypothyrodism, diabetes, autoimmune hepatitis. I am so worn out most of the time that friends are falling by the wayside - I have been told I am not "dependable." I am having a hard time trying to figure out why to stay alive. So, yes, I understand your anger and feelings of being left out...Susan

I can see how that would be a source of hurt. I am the contact person in my family and the minute I'm in the ER with mom or dad everyone gets notified with a text. I have perfectly healthy sisters who won't step in but they live as close as I do. Your sister was very detailed in explaining everything to you and I got the feeling she had your best interest at heart. Maybe if you let her know that your "ok" with being notified sooner and that it won't stress you out (assuming she is being considerate in the time frame of notification) with a thanks for the detailed message will be communication that is beneficial. The last time I needed to notify the siblings there was some technical glitch that prevented one from receiving it so I called the following day and she condescendingly described what to do the next time, several times, talked to me like I was her kid, still never showed up at hospital while he was there for 5 days, Mind you this was not a life and death situation that I would have followed up with a call immediately when I didn't hear back from her that same day, she is also one that refuses to step in and help. Needless to say this turned into an ugly argument that we haven't spoken since October of last year. I share this in hopes that you can avoid my path.